The swiggle sweater is finally finished – sleeves, collar, seams and all!

I’m going to have a nosy around the preview with my sister, tempering bank balance sighs by saying “I could make that!” (..if I had the fabric, time and awesome sewing skills of a 17th century French couturier, ahem). Thanks for the heads up, sis.

In other news, I was just rudely awoken from an epic nap by a very sweet man selling Sky packages. Evil tosser. Time to wipe away the giveaway dribble marks and knit to World on 3’s latest offering.

Finally! I’ve found some worthy tenants of my Christmas present, three pots made by Aunty Penny. In order of appearance: desert rose (from a cutting – hence the one massive leaf), aloe vera (offspring of our big plant which can’t stop cloning itself) and tiger begonia (also a present from Penny). 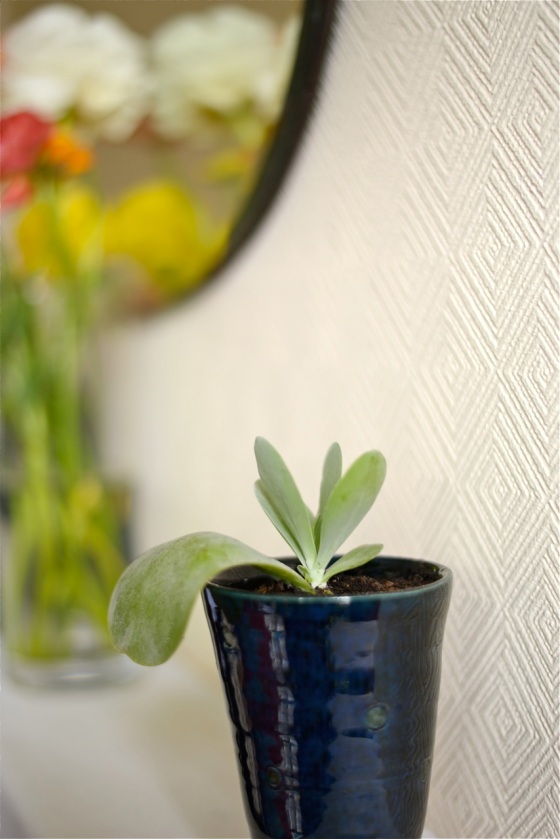 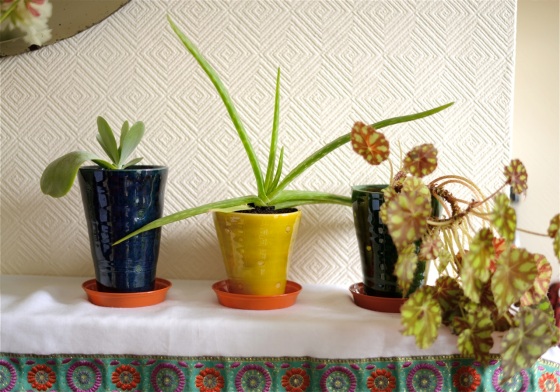 Here’s my (slightly) modified version of Aunty Penny’s pattern for a mitred square. These measurements are specifically to make a 10x10cm square in Debbie Bliss ‘Angel’ mohair yarn.

Debbie Bliss kindly donated this and lots of other beautiful yarn to The Mill, so we’ve been putting it to good use for our group piece for the forthcoming Softer textiles exhibition.

Many thanks to Aunty Penny for putting me on to this. Here’s her original, excellent advice:

“Re my comment of 20th April on diagonal squares, I’ve just been trying different decreases, knit 2 together or knit 2 together through back of loops, and for garter stitch it doesn’t seem to matter which one you do as long as it’s always the middle stitch and the stitch before that you knit together and you are consistent. These squares are particularly fetching in rainbow yarn.

I’ve also noticed that it’s a way to get a scalloped edging. Instead of carrying on decreasing until you’ve got one stitch remaining, you stop sooner and then just knit straight.”